In the name of Allah, most Gracious, most Merciful.

The latest release from One4Kids and a welcomed addition to our collection of Zaky DVDs is Zaky’s Ramadan. We’ve been listening to the Nasheeds for a few months and added the dvd to our pre-Ramadan stock-up for the kids.

As a big fan of the Zaky franchise myself, I was just as excited to check out the new release with the kids this Ramadan. So after mum had a rough night with kids last night, this morning was the perfect opportunity to take care of the kids, watch a movie and hopefully score some brownie points too. 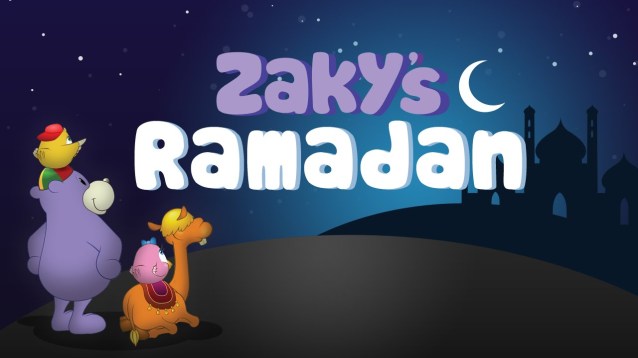 Zaky’s Ramadan is a good way to get kids excited about Ramadan and provides a simple, kid-friendly explanation of all things Ramadan. It’s a good introduction to the concept of Fasting, Suhoor, Iftar and the virtue of the month itself.

The Ramadan episodes cover a range of topics including:

Zaky’s advice for Ramadan is very practical and covers more than simply when you can and can’t eat. By focussing on the concept of Good Deeds including kindness to parents, cleanliness, charity and well-being, it provides a more holistic approach to Ramadan which I think is something we need to encourage through kids education.

Too many Muslims make Ramadan about Food and Fasting only which is a great injustice to this Blessed month and gift from Allah. By facilitating a more reformist approach, we can encourage our kids to use Ramadan as an opportunity to form good habits, become better Muslims and ultimately achieve the real goal of Ramadan… the awareness and consciousness of Allah that can guide you through the rest of the year. In Sha Allah.

A $20 investment that will entertain the kids for hours and In Sha Allah encourage good habits and a love for Ramadan. Two thumbs up from me!

The DVD is available online at One4Kids as well as a number of other websites. Click here for a preview of Zaky’s Ramadan and check out my post on Zaky & Friends from last Ramadan.

Tip: Don’t just buy these movies for the kids, watch it with them, answer their questions and let Islamic knowledge be a positive experience for them. You might even learn something yourself.

I hope many more kids can benefit from these movies In Sha Allah!

In the name of Allah, most Gracious, most Merciful.

With Eid around the corner, I’ve noticed a number of ads for the Zaky & Friends Series of Videos and I thought I’d share my thoughts on these.

I remember buying one of the ‘Zaky Movies’ for my little sister a few years ago. As a teenager (at the time), I didn’t care much about the movie itself but I thought it would be a nice gift for my baby sister. My sister was known for her endless questioning and so I was bombarded with questions about the movies which gave me some insight into how a child might absorb such stories.

Fast forward a few years and my little sis gave me these very movies for my son who was only a year old at the time but I decided to hang on to them and keep them safe for him. As he grew older and took a keener interest in the colours eminating from the tv screen, we began watching some of these movies with him and would often use them to keep him occupied while we were busy.

As first time parents we were concerned about some of the effects television and movies could have on our son and found comfort in re-running these movies from time to time as a little distraction for him. He watched the movies over and over for several months and eventually tired of them and asked us not to put any ‘Zaky Movies’ on for him. I must admit, at this point I had memorised the scripts and soundtracks of all the movies so I didn’t mind the change up.

By 2 years of age he had tasted the sweetness of television and started watching ABC for Kids. We were very mindful of his television habits and kept a close eye on the content. In my 12 weeks as a stay at home dad, I found a number of supposedly children’s television shows to be completely inappropriate for kids and with the help of my wife was able to filter through the tv guide and only allow him to watch a select few shows that we were comfortable with.

A few months passed by and though he was enjoying watching Sesame Street and one of my favourites, Fireman Sam, he began asking questions about some of the stories he had learnt in the Zaky videos. I was amazed at this since he hadn’t watched any of the movies in a while and you usually don’t expect a toddler to retain such information for such a long time. Nevertheless, I enjoyed our little conversations and to be honest, it was an amazing feeling as a parent.

His questions and curiosity got us back into the movies, I bought the entire set and for Eid that year, we got him the accessories and toys to go with the movies.

His favourite movie was Story Time 2: The story of Prophet Abraham (Ibrahim) which I watched with him a few more times so I could correctly address his questions and concerns. It was only then that I realised the power of these movies and the extent of their impact on a child’s mind. The questions he was asking related to matters of Faith including the concept of God and Good vs Evil which can sometimes get tricky when you’re dealing with a toddler. By taking the time to answer hes questions, unbeknownst to us, we had given him what I believe is the best Madrassah lesson you could possibly give a 2 and a half year old kid.

While the concept of God, particularly as The Creator was something he was already familiar with, the movie gave him an understanding of God as The Care-taker, The Protector, The Loving and Powerful as evidenced in the story of Prophet Ibrahim. He grasped the idea of idol worship being contrary to God’s teachings which also gave him a foundation for the criteria of what is right and what is wrong. He was also able to understand the concept of Prophethood and related it back to God.

The incident of the Fire in the story of Prophet Ibrahim introduced him to the power of God over all things as well as the concept of miracles. He even acknowledged the existence of the Angels which was something I was slightly concerned about due to the complexities of the unseen world.

I didn’t realise that he had understood and absorbed so much of this story until a few months later when I began reading the series of kids books titled ‘Stories of the Prophets’ to him.While I had prepared myself for the questions that might have ensued, to my astonishment, he had a firm understanding of the core concepts which facilitated his understanding and appreciation of the stories of all the Prophets – This is when I truly appreciated and understood the value of these movies.

I’ve also seen kids watch some of these videos without benefitting at all from them so it’s important not to force it on to young kids and to ensure you have the time and patience to address their questions and concerns. Parents should be watching these videos with their kids so it becomes more than just entertainment. I believe this applies to all types of entertainment, if you’re comfortable exposing your kids to something, the least you can do is expose yourself to it so you know exactly what your child is being subjected to.

The Zaky and Friends brand has grown substantially over the last few years and as a Muslim Parent in Australia, I am proud of their success and grateful for their efforts. May Allah increase them, I look forward to many more videos In Sha Allah and I’m hoping my daughter also enjoys their works.

The DVD’s and merchandise are available on the One4Kids website as well as a number of other Online Stores. Click here for a preview of Story Time 2: The story of Prophet Abraham (Ibrahim)

In the words of Merril J Fernando… ‘Do Try It’ 😉 – Your kids will thank you one day!

I hope many more kids can benefit from these videos In Sha Allah!